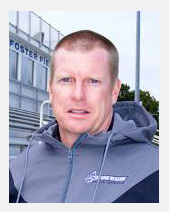 JP Stewart is the director of Marlin Lacrosse Camps in Norfolk, Virginia. He is also going into his 12th year as Head Lacrosse Coach at Virginia Wesleyan College. Stewart is the all-time winningest coach in the history of the lacrosse program at Virginia Wesleyan, & in 2008 was named Old Dominion Athletic Conference (ODAC) "Coach of the Year" as well as Virginia College Division "Coach of the Year". Both awards were the first ever for the lacrosse program at Virginia Wesleyan. He has coached 11 NCAA All-Americans, 6 players who have played professionally in the MLL, has served as a clinician for the USILA National Lacrosse Convention, & is a board member of the Hampton Roads Chapter of US Lacrosse.

In 2008 his Virginia Wesleyan lacrosse team won 11 games setting the program mark for wins in a season. The Marlins also advanced to the ODAC Championship game for the 1st time in program history. The Marlins are consistently ranked among the national leaders in numerous offensive categories. Prior to his 10 years at VWC Stewart spent three years as an assistant coach at The University of North Carolina (1999-2002), one of the top Division I programs in the nation. In addition to his assistant position at UNC he served in the same capacity at Colorado College (1999), Virginia Wesleyan (1997-1998), & Cape Henry Collegiate (1996). JP played collegiately at Hampden-Sydney College (1992-1995) earning All-ODAC Academic honors as senior in 1995. The 1995 H-SC team advanced into the NCAA Quarter-finals. JP played High-School lacrosse at Norfolk Academy for Hall-of-Fame member Tom Duquette.

Check out JP's video profile where he talks about his inspiration to be a coach and the path he's taken that has lead to his success.